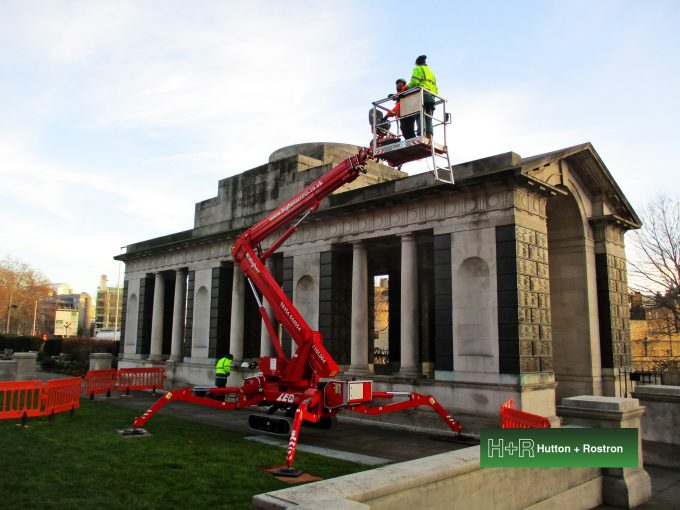 The lead-in to Christmas revealed the latest in a long line of impressive decorated 25-foot trees in the main hall of H+R’s offices.  Every year, the staff are mobilised to make the process quite a tradition

With much anticipated various First World War anniversaries in 2017, H+R have felt privileged to play a part in perpetuating the memory of those fallen.  Our work with the Commonwealth War Graves Commission has developed with a full scale and detailed investigation of penetrating damp and retained moisture to the Lutyen’s designed Tower Hill Memorial for the Merchant Navy.  The shelter building is in the shadow of the Tower of London where H+R have also worked extensively.  It was interesting to find how the constructional detailing ‘as-built’, differed from Lutyen’s original drawings

On another Lutyen’s note, it was pleasing to see that the 100-year old hydropower system at Castle Drogo, Devon ‘the last castle built in England’, which was commissioned on the advice of Country Life founder Edward Hudson is back in working order for the first time in more than 20 years

Further afield, H+R have undertaken expert witness work in Guernsey investigating building failures on a new build structure.  H+R continued to support the customer service departments of developers during the month when issues of build quality and latent defects have arisen

A major project for British Land in Spitalfields has commenced in earnest, three years after H+R’s initial surveys.  A wide range of historic and contemporary structures are involved

H+R have also returned to Sir John Soane’s Pitzhanger Manor for further minimally invasive surveys and work has also started on the refurbishment of RADA’s studios in London, supporting the Design Team