As part of a major redevelopment of York Castle, H+R were instructed to undertake a detailed condition survey of the timber roof and floor structures of the now-ruined keep, commonly referred to as Clifford’s Tower. An earlier motte and bailey castle built on the site in 1068 was destroyed by a Viking army in 1069 and the existing tower was built on the orders of William the Conqueror to dominate the former Viking city of Jórvík. There has been public outcry in relation to plans submitted by English Heritage who wish to introduce an internal walkway and roof deck to completely transform the visitor experience

In October one of our surveyors attended the Historic England ‘Making a Future for Industrial Heritage’ seminar in Wigan and as part of the event delegates visited the Grade II listed Eckersley Mills complex close to Wigan Pier. One of the mill buildings of 1884 was effectively a replica of the 1874 Elisabeth Mill in Stockport; a building that H+R know like the back of their hand having undertaken extensive condition investigations as part of the DeTrafford redevelopment of the site. Both mill buildings, designed by Stott and Sons of Lancashire, are of ‘fireproof’ jack-arch construction and include ‘hoop-iron’ bonding within the external walls

Bauman Lysons Architects commissioned H+R to carry out a preliminary condition survey of the 30,000 sq. ft. Grade II listed Abbey Mills complex in Kirkstall, Leeds. The buildings are currently in the ownership of Leeds City Council but Kirkstall Valley Development Trust Ltd seek to redevelop the site following the provision of grant funding from the Heritage Lottery fund and the Architectural Heritage Fund. The complex consists of a number of buildings dating back to the early 16th Century and most of the present buildings were in existence in 1847 producing corn, oil and woollen cloth. The first floor of the former Boiler House had quite an ecosystem and resembled the forest floor. Surely if reimagined this could be a contender for a Gold Medal at the Chelsea Flower Show, aptly named ‘When Nature Strikes’

H+R undertook specialist investigation of plant growth related façade damage to the Art Deco Bradford Odeon which is currently undergoing restoration into a 3000-person capacity venue, costing an estimated £20 million. It was of no surprise to reunite with our old friend Mr Buddleia (Buddleja davidii) who had taken root throughout the semi-derelict building, the roots of which had unfortunately caused widespread damage in the glazed terracotta units. If left untreated this invasive species could eventually inflict more damage than that achieved by the Luftwaffe in their bombing of Bradford Odeon in 1940. Although the damage that Buddleia can cause to poorly maintained buildings is well documented in the UK, it’s surprising that it isn’t give the same notoriety as Japanese Knotweed (Reynoutria japonica)

Built in 1908 as part of the Murray’s Mills complex, H+R are advising the Eric Wright Group on damp related issues in their conversion of the New Little Mill in Manchester into 68 no. apartments for Manchester Life Developments. H+R’s advice enabled the Client to manage rising damp by removing the influential moisture sources by means of drainage and/or lowering ground levels and promoting the evaporative loss of moisture at the base of the walls, thus avoiding expensive and ultimately unsuitable chemical injection damp-proof courses or electro-osmotic treatments. H+R also developed a solution for the management of saturated brickwork at parapet level. This entails installing rainscreen cladding to the rear of the parapets to prevent water penetration to the building fabric and permit the long-term evaporative drying of the brickwork 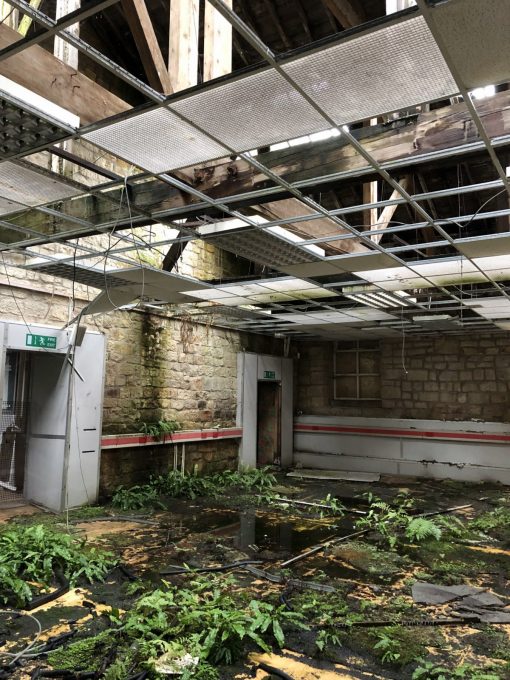