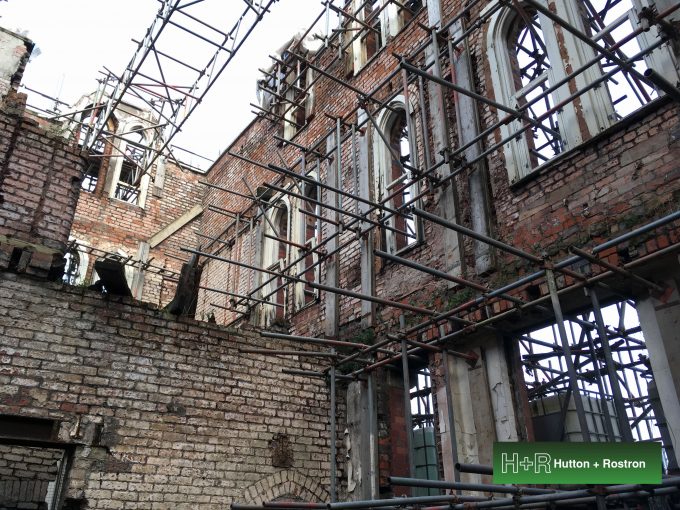 In January, H+R returned to Wakefield’s Victorian Rutland Mills complex to update our timber decay survey of March 2017 in support of our client’s purchase from the Local Authority.  The multi-million redevelopment of the former industrial mill buildings is part of the larger Wakefield Waterfront development which is expected to be complete by the end of 2022.  The site neighbours The Hepworth Wakefield where world-renowned garden designer Tom Stuart-Smith is currently transforming a patch of wasteland between the two sites into a sculpture garden.  To the centre of the garden there is a small listed gatehouse which is to be converted into a café.  We were instructed by the gallery’s Architect to undertake a condition survey and provide consultancy on the architectural detailing to ensure best performance.

H+R were instructed by Scott Hughes Design to undertake a material analysis of the brickwork and mortar of the derelict Ancoats Dispensary in Manchester.  The building is to be transformed into affordable housing after ‘devastated’ campaigners admitted defeat in their battle to save the local landmark.  Opening in 1828, the much-needed voluntary hospital provided healthcare for those working in one of the most heavily industrialised and densely populated suburbs in the city.  The local population was principally textile workers and Irish labourers who, in this period in Manchester, had a life expectancy of 17 years!

At H+R we are regularly commissioned to investigate external timber bridge structures which typically come with their own set of challenges, notably access and working over water.  In support of a Structural Engineer we were recently instructed by Chester Zoo to investigate the condition of one of their bridges, which not only was over water but also spanned a cheetah enclosure – a first for H+R.  We’re glad to report that all surveyors lived to tell the tale!  Whilst taking lunch, our surveyors explored the zoo.  However, it wasn’t the elephants, giraffes or rhinos that caught their attention -rather, a building defect new to any textbook

A survey close to home recently included the investigation of a timber roof structure of a former bar in Manchester city centre, a bar that will go down in Madchester history.  Dry Bar (catalogue number Fac201) was opened by Factory Records on Oldham Street in 1989 in what was then a semi-derelict area of the city centre.  Tony Wilson declared that ‘Dry is to be to the bars what the Hacienda is to clubs’ and thus it became a flagship for progression in the heart of what would become the Northern Quarter.  Famously, Shaun Ryder and Liam Gallagher were amongst the many who were barred.  The building which was bought for £4m has been granted planning permission to be converted into a 69-bedroom boutique hotel